Dorothy and company each have an audience with Oz separately, which immediately struck me as a parallel to Catholic Confession. Meeting Oz is also like meeting a deity. He appears to each of them in a different form.

to Dorothy - a giant bald head
to Scarecrow - a beautiful woman with green wings, green hair, and green jewels in her crown
to Tin Woodman - a beast nearly as big as an elephant; head of a rhinoceros with five eyes; five long arms and five long, slim legs; thick, woolly hair covered every part of it
to Cowardly Lion - a fireball that emits heat and near-blinding light

His appearance to Dorothy demands respect, and she is clever enough to introduce herself as Dorothy the Small and Meek. Scarecrow is enamored of the woman's beauty, and Tin Woodman and Cowardly Lion fear the forms they meet. Oz appears extremely powerful and multi-faceted, but Baum is actually using them as a set-up for the eventual discovery that Oz is a fraud. Though Oz appears to be capable of anger, kindness, and wisdom, his forms all deliver the same request to Dorothy & co.: Kill the Witch.

The Wizard of Oz is a fake, so what is actually Divine in the land of Oz? 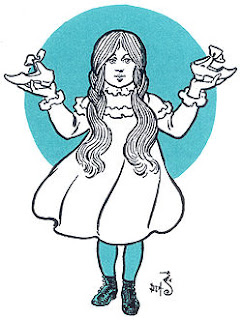 reminds me of this

The images of Dorothy and Vishnu strike me because of their calm expressions, blue skin and blue accents, the positioning of the arms and the carrying of symbolic items. I don't think it has anything to do with Hinudism specifically, but Vishnu is who my art history mind thought of first because he is holding symbolic objects. It's just that in general I think Denslow's image is trying to evoke a numinous quality.

The text doesn't have Dorothy accept the shoes with divine grace as suggested in the illustration. All she does is take them into her house and set them on the kitchen table. She has other things on her mind, after all. When Dorothy sets out for her journey, she tries the silver shoes on out of practicality.

Then she looked down at her feet and noticed how old and worn her shoes were.

"They surely will never do for a long journey, Toto," she said...At that moment Dorothy saw lying on the table the silver shoes that had belonged to the Witch of the East.

"I wonder if they will fit me," she said to Toto. "They would be just the thing to take a long walk in, for they could not wear out."

Dorothy never shows any vanity when it comes to the shoes. As I noted in my first post, she becomes angry when the Witch of the West steals one of the shoes, but I maintain that is because it was something she earned, and something that protected her from the Witch, rather than something she wanted because it was beautiful. They are a necessity. I think it is the protection that the shoes offer Dorothy, and the wish they grant at the end of the novel that makes her relationship to them similar to that of one between a person of faith and their god.

Dorothy & co. all seek something from the Wizard often sought through prayer--wisdom, love, courage, and to be in a place where you belong with the people who love you. Scarecrow, Tin Woodman, and Cowardly Lion all have those things from the beginning, though it takes a man pretending to be a superior being to make them believe in their abilities, and even then what the Wizard gives them is all fake. Dorothy's silver shoes, however, actually hold power, and as Glinda reveals at the end, the way to her heart's desire has been with Dorothy all along in the form of the shoes. They have been with her all along, much like the oft heard refrain that god is always with us. In the above passage Dorothy says the shoes could not wear out, immediately reminding me of the unending love God is supposed to have for humans.

Oz is a kind of Paradise. Though there are struggles, it is still a place to escape poverty, work, and any unpleasant things in life. It is where Dorothy & co. find enlightenment on a great adventure before Dorothy is sent back to her earthly family by a pair of divine shoes.

Besides a small church Lion breaks when Dorothy & visit the China Country, which is a miniature country where everyone and everything is made of china, there is no sign of religion in Oz. Everyone worships the good people who rule them, and rely on those rulers to ensure their safety.

That's it for The Wonderful Wizard of Oz. Next up: The Marvelous Land of Oz!
Posted by Jazz at 6:12 PM

Email ThisBlogThis!Share to TwitterShare to FacebookShare to Pinterest
Labels: great and powerful oz read through, wonderful wizard of oz