Cinderella and Her Father 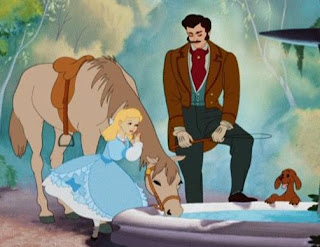 My religion is listed on Facebook as Folklore and Faerie Tales, and that's what I'd tell you if you asked, with the addition that I was baptized Roman Catholic. I turn to faerie tales in times of distress the way others turn to scripture. These stories are on my mind daily. Like with all texts, their meanings become clearer with the more I experience the world.

I had a revelation about Cinderella's father just last month. It has mystified me since childhood, ever since I found out Cinderella's father was not dead, as to why he would allow his daughter to be treated deplorably. Cinderella is upheld as the classic rags to riches story when it is actually a riches to rags to riches story. A high born girl's station is lowered in her own household, and by the end of the story she is raised to a higher rank than she enjoyed before. I don't think it's a stretch to imagine a real world man of means would not stand to see his blood relation treated as a commoner. It would wound his pride too much. So WHY did he allow it to happen?

After seeing too many real world examples of disappointing parenting, the answer clicked into my mind while I drove down a narrow Pennsylvania road a few evenings ago. Gender roles dictate that women care for children. Some fathers will give girlfriends/stepmothers authority over children even if those women have no experience with care giving. My friends will be surprised to see me write something negative about women. Worry not, the blame isn't all on controlling stepmothers abusing their power. Gender roles are the fault of the patriarchy, and once again the patriarchy has ruined everything. Faerie tales let fathers off the hook all the time. Hansel and Gretel are thrilled to reunite with their father even though he agreed to abandon them in the woods. Nothing of reproach happens to the man who risks his daughter's life when he boasts she can spin straw into gold.

It would be fascinating to see Cinderella's father examined in a modern book or movie. Hollywood is far too happy to crank out bland retellings, but maybe there are some books that include Cinderella's father. Recommendations welcome.
Posted by Jazz at 8:55 PM